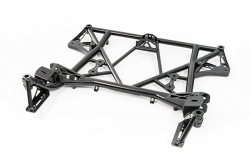 A Nissan GT-R is never going to be a flyweight, but changing the front and rear subframes for items that are 23kg lighter while improving serviceability of key components is a big step in the right direction. Verkline is presenting the second iteration of its light tubular subframes for the R35 Nissan GT-R. They are suitable for both circuit and drag racing.

The front subframe is a useful 40% lighter than the OEM part, and adds two sway bar mounting points and clear space for dry-sump piping. The rear tubular subframe is 47% lighter than stock. In addition it allows the gearbox to be removed with the subframe in place.

The subframes are made of T45 steel that is TIG welded and powder coated, resulting in a solution that is not only lighter than the OEM setup, but also stiffer. The fact that Verkline’s subframes are used on the fastest R35, which has a barely believable 3,500bhp, is testament to their strength.