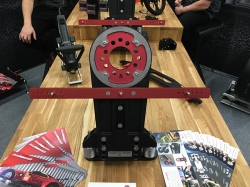 On Racefab’s booth (Booth 6070) at PMW Expo is a new leveling platform upgrade for the company’s TDAC setup wheels. It allows race teams to perform corner weighting and suspension setup wherever they are, without the need for separate leveling trays.

The core setup wheels were launched earlier this year in response to demand for lighter, more portable equipment with enough accuracy. Thom Attewell from Racefab told us at the show: “We found that there were a few British GT teams that needed to set their cars up more accurately. They tried ‘lesser’ products, so they gave us a brief and our setup wheel has now been adopted by almost half the British GT grid.”

Racefab also has its tire scraper on show, which promises to make the traditionally messy job of cleaning up tires faster and easier by using an industrial-grade heat gun that is mounted in a rigid frame and aimed directly onto the blade. Attewell commented, “Tests have shown that it’s three to four times faster than traditional methods of cleaning up tires. I did it in the traditional way a few years ago and vowed I would never do it again. We were asked to come up with a better solution for tire scraping and now it’s actually quite therapeutic! We’ve already sold quite a few of those in the past few days.”