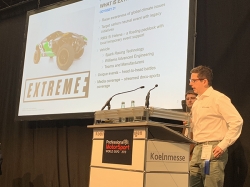 The free-to-attend Engineering Workshop got off to a flying start on Day 2 with an exclusive insight into the vehicle design and battery technology powering Extreme E’s electric SUV, ODYSSEY 21.

Glen Pascoe, principal engineer, Williams Advanced Engineering, detailed the challenges of supplying batteries for the newly launched electric SUV off-road racing series, which is due to set off on its first journey in January 2021.

Pascoe explained how Williams is plugging into the expertise and experience of the same team that assembled the batteries and cells for the first four seasons of the ABB FIA Formula E Championship, while also highlighting some of the key differences, not least the harsh environments that the car – and battery – will have to face.

Operating temperatures will range from -30°C to +40°C. Water ingress, 100% humidity, field servicing by a small team and extreme vibration and shock are just some of the other challenges that have called for a very different approach. A strong focus on structural engineering and early prototype and testing, along with a limited number of test team personnel to replicate race scenarios, has helped solve some of the problems presented by the new format.

The ODYSSEY 21’s peak 400kw (550hp) output is capable of firing the 1,650kg, 2.3m-wide car from 0-62mph in 4.5 seconds, at gradients of up to 130%. Each vehicle will comprise a common package of standardized parts, including a powertrain manufactured by Spark Racing Technology with a battery produced by Williams Advanced Engineering. The chassis comprises a niobium-reinforced steel alloy tubular frame, as well as crash structure and roll cage; tires to suit the extreme conditions will be supplied by Continental Tyres.