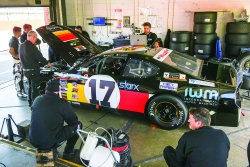 In addition to the company’s broad portfolio of tried-and-true racing fuels, VP designs innovative second-generation sustainable fuel blends such as its new N20 unleaded – developed as a ‘drop-in’ fuel in collaboration with the NASCAR Whelen Euro Series. It was the first such effort for VP in Europe.

N20 complies with the FIA Appendix J and the EN228 European E10 road fuels regulations. It can be put into any modern European gasoline road car and used long term without any issues. It requires no adjustments to the engine calibration and causes no fuel system compatibility issues for cars approved for E10 fuels.
Unlike first-generation renewable fuels that rely on direct food sources, VP formulates its second-generation fuels from agricultural waste. This feedstock does not compete with the food supply chain, bringing innovation and sustainability to the product.

While some people worry about the impact of current and future fuel regulations on racing, VP is using its experience and expertise to ensure that its second-generation fuels maintain the same excitement and enjoyment that racers and fans have always expected.