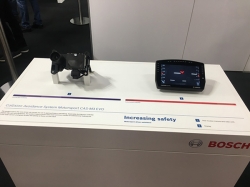 Bosch Motorsport (Booth 3050) is presenting an update to its collision avoidance system. The EVO version of its CAS M3 system boasts an improved HD camera with extra-low latency, as well as a dedicated motorsport connection for faultless reliability in harsh racing conditions.

The system combines a rear-facing camera and radar with a high-resolution screen inside the cabin to give the driver a constant overview of the cars behind, with information on their closing speed, distance and position.

Senior manager Michael Stams outlined the strengths of the system: “Even in bright and dry conditions, it still helps the driver to glance at the screen now and then. However, the real strength of the system is when it’s dark, misty or wet. In these conditions, the radar will still be able to tell when objects are getting closer and where they are.”

The new camera has lower latency at 60-80ms, making sure it can show its images on the display in real time. It now also films in HD resolution, enabling future developments for video recording. Another new development is that the camera lens is designed to work well in conjunction with the mid-range radar sensor of the system. The camera sends its information to the display over Ethernet, while the radar uses CAN.

The EVO version also features a new motorsport-grade connector. Stams explained why this was necessary: “The most important new feature is the motorsport connector. The previous version had a more standard connector and we occasionally saw issues caused by vibrations.”

Another benefit of the system is that it integrates with Bosch’s complete system. Stams said, “We can configure all our devices using one single tool, so if an engineer has to work on a car, they know that they can use the single tool for everything, including the CAS M3 system.”