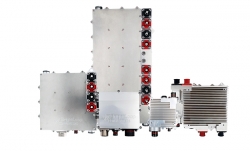 A combination of the most advanced technologies along with broad expertise in power electronics has allowed BrightLoop to develop the smallest, lightest and most powerful DC/DC converters on the market with 3kW/kg power density. The Performance DC/DC product line includes five converters (2 LV<->LV and 3 HV<->LV) ranging from 1.7kW to 10kW and designed for harsh environments. Leveraging GaN and SiC technologies, these converters are around half the size and weight of BrightLoop’s previous generation DC/DC converters released just three years ago.

BrightLoop’s DC/DC converters are used in the most high performing hybrid and electric series, such as Formula 1, Formula E, Extreme E, etc. A converter’s function is to power the low-voltage electronics including pumps, lighting,and radio. Thanks to a very innovative architecture, great versatility is provided, allowing easy setup of multiple output voltage. Different voltages can be used for the loads, paving the way for advanced multivoltage architectures such as 12V–48V. The high number of possible outputs (up to eight) allows power distribution functions to be realized by the DC/DC converter, without the need for other equipment. It also features full reversibility, opening the possibilities for advanced functions such as active pre-charge of HV bus.

BrightLoop’s converters go beyond the main function of power conversion and include extensive CAN remote monitoring and software-settable output voltage and current. The Performance DC/DC converters are ready for the challenges of motorsport and extreme vehicles including supercars, e-boats and eVTOLs.