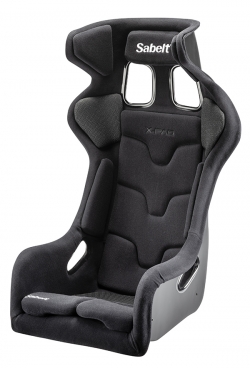 The X-Pad is a new seat that was specially developed and produced by Sabelt to offer a light, comfortable and versatile product homologated according to the FIA Standard 8855-1999. The shell was designed to be ergonomic and comfortable, and is available in fiberglass or carbon fiber. The carbon fiber version weighs only 4.8kg, thanks to the carbon pre-preg and autoclave production process.

The new seat gets its name from the cover, which is made up of individual pads that are rugged and can be applied to the shell in different positions to accommodate different driver body types and preferences. In addition to being adaptable, the pad construction is lighter than a traditional cover by around 1kg.

The new seat has been developed with direct input from the motorsport teams that will use it. The carbon-fiber version is already seeing service with Hyundai in the WTCR championship, and with McLaren on the Senna GTR. Renault Sport’s upcoming Clio Cup car will feature the GRP version of the X-Pad.